Quality and durable FSC Scandinavian pine picnic bench, pre-treated light green so it can last the tests of time. We would recommend further annual treatments to retain colour.
A wooden picnic bench that comfortably seats 8 people.
Easy assemble – this wood picnic table is delivered flat packed but can be assembled easily by two people. 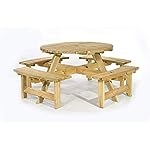 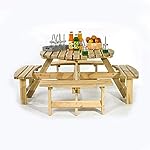 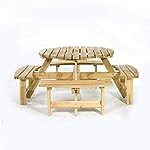 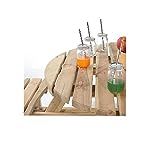 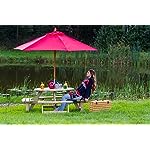 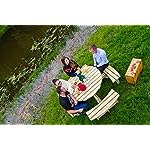 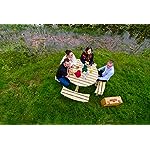 Quality and durable FSC Scandinavian pine picnic bench, pre-treated light green so it can last the tests of time. We would recommend further annual treatments to retain colour.
A wooden picnic bench that comfortably seats 8 people.
Easy assemble - this wood picnic table is delivered flat packed but can be assembled easily by two people.
Ideal wood pub table for commercial or domestic use. This pub garden table is ideal for a beer garden, cafe, park or school, as well as in a garden.
The wooden pub table has a 32mm thick timbers, strong enough for commercial use. The tabletop diameter is 110cm, with a total footprint diameter of 180cm.

I would have given this 4.5 stars actually but the system doesn't allow. So 5 stars it is, and read on for why I'd have knocked off half a star if I could have. Suffice it to say to the finished product is nearer to 95% perfect rather than the 80% that the star system implies. Arrived very promptly indeed in three boxes. Rather like the three bears, one was small and pretty heavy, the second was long and heavy, and the third was enormous, and a fork lift truck would have come in handy. Note that this is not only heavy duty, but heavy weight, and although I ignored the instructions, which advised two person assembly and handling, this should be regarded as really good advice. I would recommend that you should assemble the bench on the site where it is to be used if you can. It is very heavy to move more than a few yards once assembled. Much of a the assembly is already done for you. The table top is the main content of the fork lift box, and each of the four seats are also fully assembled and simply require bolting to the main frame. All bolts are provided, in a mixture of two sizes for the heavy bolts, plus some screw bolts. A hex key is provided, which should be consigned to the bin at the earliest opportunity as not only is it not really up to the job, but in many cases there is simple not the clearance to use it. A power driver with the right size hex key bit will prove to be worth its' weight in gold. Others have commented on the quality of instructions supplied. It's a very simple set of drawings which shows you what goes where and provides a list of contents (which in my case were spot on). There are no nuts for the bolts, these are already installed into the receiving end of the relevant holes. Whilst the instructions do a fair job of what goes where, they don't warn you of some of the pitfalls you may (will) encounter! Otherwise they are entirely adequate. Firstly you attach a leg assembly to each of the four seats. These are identical, but provide a splendid opportunity to get things wrongs four times over. Build the first one very carefully, paying particular regard to the direction/angling of the crosspiece. The countersinking goes on top, the angling is outward - look at the drawing. Just for entertainment, I found that all pieces can easily be installed the wrong way round as they is no "keying" as such. Yes, they will fit perfectly but you have to get it right (and you will probably find yourself working with the seat inverted, just to make life more complicated when you expected it to be easier that way). Fortunately any errors can easily be rectified without damage, but just go slowly and methodically, checking each and every part as you go. Having completed the seat assemblies, you then assemble the main cross spars which run underneath the table and hold the main legs. This is easy as there's really only one way to fit these together, just keep an eye on the inbuilt bolt threads and made sure that you pair correctly. The instructions indicate to attach to the table top and then work downwards. I decided to attach the legs to the crosspieces and then to the tabletop. Both will work - eventually - after you discover that at this stage the table starts to develop a mind of it's own and attempt to crush your fingers. Two people are a definite asset at this time. It's only 8 bolts and 4 screw bolts, but it seemed like a lot more. Once you have the thing together, and right way up, you may find that you have trouble aligning the final bolts in the base of the seating units. These holes have no play, penetrate three spars, and are difficult to get to. The seats are firmly held in place both by wooden spars, gravity, and anchor screws. When I considered the strength of the unit, and that all the loads on the seats were in the downward direction, I felt it safe to temporarily omit these bolts, relying on the anchor screws, and have another go when I have recovered sufficient energy. Suffice it to say that the finished unit is well designed on triangular principles and being made of heavy gauge timber is very strong indeed - it may be that I use heavy stainless steel screws in place of the supplied bolts to anchor the seats firmly - they will be far easier to install. There goes that half a point I referred to at the start. Someone reported that they assembled this unit in 45 minutes. It took me a lot longer, but was well worth it. My family visited the weekend that I completed this bench. They climbed all over and on it. It withstood everything with ease. Two arms of the family were so impressed that they want one each. I told them where to buy it, and said they would really enjoy putting it together