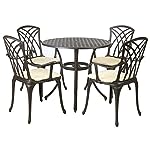 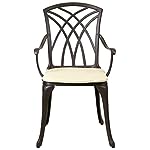 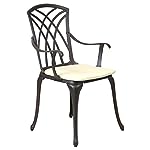 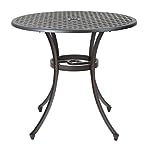 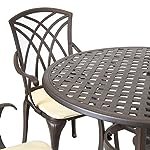 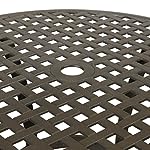 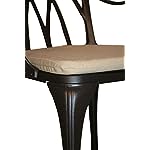 Charles Bentley Metal Cast Aluminium 5 Piece Stamford Garden Furniture Patio Set With Cushions We were somewhat wary of buying this product without seeing it and sitting on it first. However our concerns were unfounded. The chairs are not big, but big enough, in the sense that they're bistro chairs rather than full dining chairs. Initially worried that they might not be sturdy enough, they turn out to be fine, comfortably seating people in the normal range of weights. We find the design light, but elegant, the whole effect is pleasing in the bronze finish. Delivery was prompt, but I couldn't find courier tracking information. Unlike some other reviewers, all parts were present, with surplus bolts, washers and nut covers. The latter were needed as a couple were poorly moulded. The packaging was excellent with rubber covers on all the pre-placed bolts. Assembly was lengthy, about two hours as others have said, but not really needing two people. Access to some of the bolts while assembling parts was a little precarious, but to be expected in a self-assembly item. It was made much, much easier with our own ratchet socket set, rather than the small supplied spanner. Some of the bolts were a little long for the job and needed a final tighten with a spanner. I would say it's worth buying a cheap ratchet socket set just to speed assembly. The instructions are adequate, missing the odd obvious point, but nothing too concerning. I do have some slight concerns over longevity. The set is held in place by steel bolts that are coated at the end (which are also not quite flush with the aluminium casting surface) and the plastic nut covers protect the other end, but not quite extending over the outer rim of the flat washer. Even though I sprayed some oil over the nuts before placing the covers over, I strongly suspect the steel will rust pretty quickly. I really doubt whether this could be left uncovered in a garden without rusting quite fast. We plan to buy a cover.Of course the assembly features are part of what makes this product well priced. So I've dropped a star because I would have wished a slightly more effective way of protecting the nuts and bolts against long term corrosion.But all said, we're very pleased with this well priced, attractive and comfortable product.