3 Seat garden bench manufactured to the highest standards.
Ergonomically designed with a comfortable curved design and rounded edges.
Precision made for easy self-assembly. 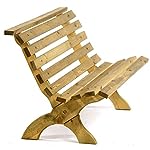 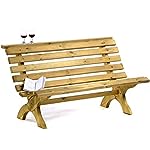 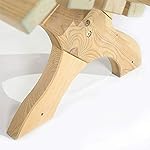 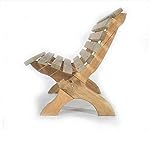 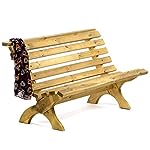 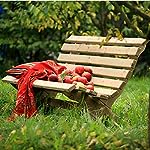 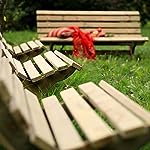 Sit back and let the world go by... The Lily Garden bench has a contoured ergonomic shaping. Perfect for garden parties and cosy retreats you'll love its comfort and looks. A very comfortable wooden bench suitable for gardens. This curvy FSC pine bench is made from slow-growing pine. It easily accommodates three adults and has 32mm thick slats and 38mm thick legs. It is easily assembled. One of our most popular items.Height: 82cm. Width: 150cm. Depth: 76cm

As has been commented by one or two other reviewers, this is a fine bench, sturdy and appears well-made. However, there are niggles too. They do not detract from the finished bench but that is the key word - to get this to be its best you could consider finishing it off. Firstly, not all of the main bars that go across are exactly the same length. Believe it or not, this is true. Some are just ever so slightly out, maybe 1cm or something like that. You can hardly tell. It doesn't detract from the bench, but it's just weird that you'd expect they'd all come off the same machine at the same time? One of the bars was also not chamfered at one end... maybe someone forgot? Plus the screw hole guides in the two legs don't line-up correctly with the holes in the bars - so I had to just drive on through and force the screws into the wood where there was no pilot hole. I'll reiterate, though - I like this bench. What I did was this... I got all the parts together and I sanded them with an orbital sander at 230 grit - just to smooth it down a bit as the wood is still quite rough... this was a light sanding only... it just made everything feel better. Then I put some wood hardener into the feet and let it soak in (I had it handy, so I just thought I would). Then I rubbed linseed oil into all of the parts before assembling. You need a PZ3 bit to drive the screws and I used an impact driver as I was going into solid wood... job done in hardly any time at all. The whole thing took me an afternoon because of the sanding and oiling but the bench now looks a very attractive golden colour. I'm pleased with it and I'm hoping that it will stand the test of time. It's rigid and not actually that heavy. I even though I could make this myself while putting it together... I might give it a go and make one even longer and even more sturdy. I didn't think pine would cut it (no pun intended) but I bet it will be fine